How To Live With A Mate And Not Destroy The Friendship Yes, yes, everyone knows that moving house is incredibly stressful. Picking the right place, the right movers, the right throw pillows to artfully toss across the couch you spent six months deciding on – it’s tough. But so is trying to find the right person to live with.

While there’s no shortage of stories about Gumtree-sourced housemates who trash the place, leave aggressive Post-It notes or invite their weirdo friends over, living with a close friend can end up less-than-ideal, too. So how do you decide if your pal is suited to become your housemate? Can you do it successfully without destroying your relationship entirely? Yes, you can. Here’s a few tips.

They’re the best – you love them, you’ve known them for ages, you tag each other in only the very best memes. But what don’t you like about them? What are the things they’re going to do that will annoy you, and can you live with those things? Make a list, then make sure you hide and burn that list forever so they never see it, but keep it inside your head. Because you love them despite these things, but will that continue to be true if you and your problems have to literally live with them and their problems? 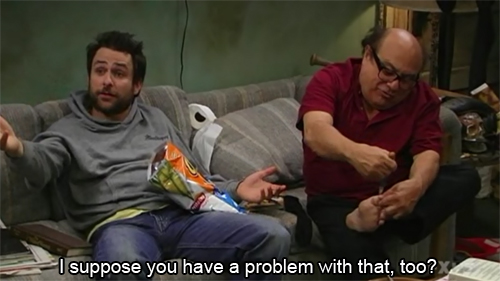 #2 Talk about your lifestyles and your priorities

This stuff is very important to nut out. People consistently trick themselves into thinking they’re far more chill about little things than they actually are. You think you don’t mind where the couch goes, but be real, you totally care. You think you won’t mind a few dishes on the bench, but when you’ve worked a long day and you need the bench space to cook, will it eat away at you? Are you someone who needs a clean, open space? Do you want a social house, or a quiet space? Do you get crabby if you’re woken up by housemates at 3am? Be honest about these things, and discuss whether it sounds like you and your bestie have comparable lifestyles

#3 Don’t be scared to make rules

As in the above point, the new millennia has put far too much emphasis on being “chill”. Rules aren’t chill. Forget chill and make the rules. Your parents had chore days for a reason, because it’s hard to wrangle children, and it’s harder to wrangle a house full of adults. When you set out your priorities and values early, identify what’s most important to everyone in the house and make sure you set little tasks to avoid issues down the track. Not to sound like a couples counselor, but like, communication is key, people. It’s okay to air your feelings in a calm and considered way. If something’s bothering you, tell the house about it. Don’t bottle it up and express it on a note stuck to the fridge that implies you’ll move out if this person leaves their coffee cup out one more time and I swear to god Rhonda if you touch my milk one more time! Ugh. It doesn’t have to be serious – walk it in, talk it out. Go on a walk after dinner to chat. Eat dinner together sometimes. Plan fun stuff to do together that reminds you why you wanted to be around each other  in the first place.